Join us for our weekly product demo!Register now
About
Solutions
Resources
Log In
BoostMySchool Blog›Case Studies

Learn how focusing on the three C’s for Giving Day success resonated with Trinity-Pawling’s unique school community and created the cornerstones for future annual fund growth.

Highlights from Rise to the Challenge Giving Day 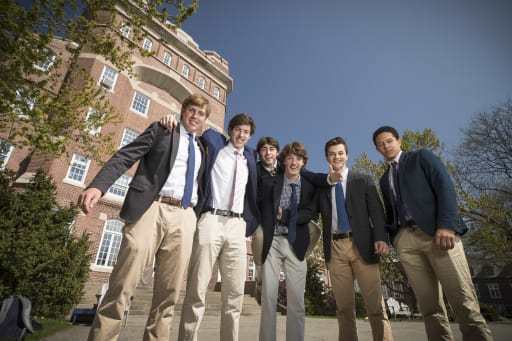 Founded in 1907, Trinity-Pawling School is an independent college preparatory boarding and day school for boys in grades 7 through 12/PG. Their 230-acre campus is located 60 miles north of New York City in Pawling, New York. The mission of Trinity-Pawling School is to educate and instill a value system that prepares young men to be contributing members of society amidst the challenges of an ever-changing world. The 2020 academic year would prove to put their mission to the test. With the effects of the pandemic continuing to shift and challenge how this independent school honored important traditions and provided their students the skills and confidence to adapt, they reached out to their school community for support. Rise to the Challenge, a 24-hour Giving Day, was developed to address the areas of critical need on campus and the unexpected expenses precipitated by the COVID-19 pandemic.

Rising to the Challenge.

Kate on adjusting their Giving Day strategy in response to unprecedented change.

The arrival of spring 2020 was marred by the pandemic and would prove to be historic in both the uncertainty and challenges presented to Trinity-Pawling School. A swift response would require the unwavering support of the entire school community. Trinity-Pawling quickly pivoted to remote learning and began planning for the safe reopening of their campus. Students and faculty were asked to “rise to the challenge” of remote learning, and this call to action would soon become the motivation behind their revamped Giving Day campaign.

Prior to the fundraising landscape being severely disrupted by the pandemic in March, Kate Vengrove, Trinity-Pawling’s Director of Engagement, had planned to host their annual Giving Day event in April for a 24-hour period only, a new format for the School. The original plans included the Giving Day campaign being followed by LYBUNT and SYBUNT asks in June. With the pandemic bearing down, she knew it was critical to shift the timeline and strategy significantly in order to focus on supporting alumni and parents through the crisis.

After gathering feedback from the Board of Trustees, key volunteers, and their fundraising partner, BoostMySchool, Kate and her team determined they would reschedule their Giving Day event to June and call it Rise to the Challenge. They postponed all solicitations planned for mid-March through June and substituted them with well-being check-ins and notes of support to their donor base. However, Kate’s team was not without concern for how they would meet their annual financial goals regardless of the “new normal” they were now facing.

The goal of 1,000 donors, experienced as the highwater mark for past giving campaigns, would now be a stretch. Instead, a more attainable goal of 300 gifts was set and represented each of the 300 Trinity-Pawling students who were now facing a new set of challenges. The revised goal provided meaning at such a tenuous time for the students and their families acclimating to remote learning. Though lower than in the past, the goal provided a very resolute 24-hour atmosphere for the newly formatted 1-day challenge.

The Three C’s - Anatomy of a Successful Giving Day.

Kate on how accessibility of data transformed their Giving Day strategy.

One of the most transformative findings to inform their model involved the use of data. In the past, they did not have the technology to support tracking real-time giving stats. So, in an effort to keep up with the gifts as they came in, the advancement staff would create complex and time-consuming spreadsheets. This method quickly proved to be challenging, labor intensive, and inaccurate for creating a sense of urgency throughout the campaign. It was then that Trinity-Pawling learned about their current fundraising partner, BoostMySchool, a giving and engagement platform designed exclusively for schools and higher-ed. The giving platform provided accessibility to data in real-time and replaced nearly 3 weeks of full-time staff labor needed to create and manage their current spreadsheet method!

For 2020, their carefully crafted strategy for executing a Giving Day would be instrumental as they incorporated the three C’s for fundraising success as a guide – context, competition, and community.

Kate on rallying volunteers in support of Giving Day purpose.

Because the context of a special event like a Giving Day is crucial to its success, Trinity-Pawling’s decision to move forward with their Giving Day amidst the pandemic thoughtfully included sharing the collective urgency and circumstance surrounding the situation with their volunteer base – their class agents. This loyal and enthusiastic group provided valuable feedback for how a fundraising ask would be received by alumni and families at this difficult time. Being included in this decision gave the volunteers a sense of ownership in the Giving Day event. They were now equipped to share the fundraising messaging in a personally compelling and honest manner.

With her volunteers now fully engaged and passionate about meeting the shared goal, the advancement team set out to build a clear plan for communicating the event a month prior. To tap into the best of their school community’s human spirit, they worked closely with the communications team developing messaging that would inspire donors, with a clear case for support and a compelling call to action centered on them and the impact they could make. This messaging became the foundation for their email, texting, and social media campaign in the weeks leading to and including the Giving Day.

With a set goal that was achievable early on in the Giving Day clock, Kate and her team turned attention to planning the incentives to be offered throughout that day. Class challenges, matching gifts, and promotional incentive items were thoughtfully considered ahead of time and intentionally introduced at planned intervals throughout the 24-hour period. Since every school community is unique and has its own personality, finding incentives that resonate is crucial. For Trinity-Pawling, using the BoostMySchool platform to incorporate several incentives such as a matching gift challenge from the Board of Trustees, several fun class challenges, and a “Power Hour” sock giveaway incentive provided the context necessary for maintaining excitement throughout their Giving Day.

Kate on how the BoostMySchool platform supported and roused Giving Day competition.

Passionate donors are competitive by nature and the spirit of a Giving Day tends to encourage a healthy competition. Trinity-Pawling was able to tap into the natural competition their boys’ school already enjoyed. Use of the leaderboard feature and the ability to announce and track class and matching gift challenges through the BoostMySchool platform aptly created a competitive environment virtually to build urgency and excitement.

In fact, the competition played out on the platform’s leaderboards between two classes who have historically been competitive. The interactive leaderboard tapped into this and the School continued to see gifts tallied from these classes for a full two weeks after the Giving Day ended.

To help facilitate the competitive atmosphere, Kate’s team promoted that the varied payment methods made available through the BoostMySchool platform, including bank transfers, stock, or checks, would also appear in real-time on the leaderboard. To keep the momentum going, the advancement team entered gifts that arrived via check on the Giving Day through the backend of the platform. They too, would then be counted for in real-time on the leaderboards – allowing all donors to be recognized and fully engaged in the excitement.

Community - We’re All in this Together.

Kate on how community is the motivating force for Giving Day success.

It became very clear that the collaborative relationship the advancement team fostered with their alumni volunteers, parents, faculty and staff, and BoostMySchool paid off. They helped the school community to feel more connected, tap into more resources, and become stronger and more resilient because of it. The altruistic energy of the Rise to the Challenge Giving Day was palpable and evident from the comments of appreciation, recognition, and support that accompanied many of the online gifts. Enthusiasm exuded within the comments posted on their landing page!

The unprecedented circumstances of the pandemic dictated setting a conservative goal but the advancement team would discover early in the Giving Day that the goal had easily been surpassed. Energized by the initial success, the community turned their collective focus to shattering the goal instead. Strategically announcing the Board of Trustee challenge of matching every gift up to $100,000, setting up class challenges as they were issued in real-time, and posting comments of encouragement and gratitude all served to connect their school community in and around a shared goal. For alumni, parents, and staff alike, being able to publicly read how others felt about Trinity-Pawling helped to increase the sense of community – making an enormous impact on the bottom line.

And, the Trinity-Pawling community spirit didn’t end there. With more than 88% of donors selecting to cover the online gift processing fees, they were ensuring that every dollar of their gift would be received by the school as intended. Kate and the advancement team were moved by the generosity of their community as they truly did “rise to the challenge” with many making larger gifts than ever before!

Looking Back, Moving Ahead.

For Trinity-Pawling, Giving Challenge successes have always been measured by the level of participation with an equally significant barometer of increasing dollars raised year over year. In the past, their prescribed goal of 1,000 donors over a three-week period required stretching every campus resource available. So, when they nearly doubled their goal of 300 donors so quickly this year, the advancement team took notice.

Undoubtedly, focusing on aspects within the three C’s for Giving Day success that resonated with their unique school community created the cornerstones for future growth. Setting a goal that was both achievable and meaningful; thoughtful planning of incentives to be issued throughout that day; and providing technology that would gather and mobilize their school community ensured a Giving Day strategy that defined virtual giving at its core. At Trinity-Pawling, that simply meant promoting their community – one that is generous, engaged, and committed to investing in its future.

Holman is the founder and CEO of BoostMySchool. He actively helps his former high school with their fundraising and alumni outreach, which is how the idea for BoostMySchool came about. He is a strong believer in the power of education to change the world and volunteers with programs that support underrepresented students in math and science.