How Rosary Academy Increased Results by 3x for Their 3rd Annual Day of Giving (with a Staff of 3!)

Learn how a recommendation from a peer school and a well-planned strategy helped Rosary surpass their Day of Giving goals.

Highlights from Rosary’s Day of Giving

Increase in donations from past year

Rosary Academy is an all-girls Catholic college preparatory high school located in Fullerton, CA. Rosary was founded in 1965 by the Archdiocese of Los Angeles with the first administrators the Sisters of St. Joseph of Orange to provide greater opportunity for girls residing in Orange County to attend a Catholic secondary school and pursue higher education. Rosary’s crest presents the school’s philosophy of growth — spiritual, intellectual, emotional, and physical.

Though still relatively green to hosting a Day of Giving, Rosary embraced the value it brought to their overall annual fundraising strategy. In addition to raising money for the Annual Fund, a Day of Giving helped expand community exposure and attract new supporters. It became a day dedicated to fundraising for their entire school community, an “all hands on deck” environment that allowed everyone involved to see their impact go far beyond the 24 hours.

A Recommendation Sets the Stage

For their third annual Day of Giving, Rosary wanted to build on the successes experienced from the past two years. They were feeling more confident with the planning and execution of a Day of Giving program, and were seeking ways to boost overall participation.

Even though Rosary initially ruled out partnering with an online giving platform, a trusted referral from a member of Rosary’s Board changed the development team’s perspective. Committed to seeing Rosary’s fundraising success, Nicole Cosand ’85 - who works at Mayfield Senior School in Pasadena, CA - eagerly shared how partnering with BoostMySchool not only made life easier for Mayfield’s development team, but also provided an ROI through increased giving.

Nicole Cosand ’85, Rosary alumna and consultative board member, recommended BoostMySchool. After researching new ways to increase excitement around our Day of Giving and speaking to the founder of BMS, I believed this platform would take our fundraising efforts to the next level. I was drawn by the aesthetic of the platform, ease of giving, donor recognition, community comments, and accessibility to our account manager.

The Fundamentals: Branding and Goal Setting

Rosary used hashtag #womenonamission in honor of long-term principal, Ms. Trudy Mazzarella. Ms. Mazzarella served as Rosary’s principal for over 24 years and made a significant impact on the students. She encouraged and supported hundreds of young women.

With a positive trend in results from the previous Day of Giving, Rosary felt it could aim a bit higher. They settled on having a goal of $35k, $10k more than what was raised last year.

In August, I met with my advancement coordinator and marketing coordinator to strategize on our theme. Two months before our Day of Giving, we focused on capturing impactful photos and video and developed a tagline that resonated across decades, #womenonamission. Two weeks leading up to our Day of Giving I was referred to BMS. I was drawn by the donor recognition and comments and thought this visual would be a game changer for our community.

Not a “Set It and Forget It” Kind of Day

From previous successes, Rosary had learned that a successful Day of Giving required constant activity for the entire day. For this year, they planned a variety of engagement opportunities including phone calls, online videos, e-mails, social media, and a gift-for-giving promotion.

Relying on the support of the community, an alumnae volunteered to prepare a video building up excitement around the #womenonamission. For an additional branding opportunity and simple way to say thank you, everyone that donated on the Day of Giving received an “I ❤️Rosary” button.

True to their school’s mission, the women of Rosary Academy are changing the world and their Day of Giving campaign is proof. The community hit the original $35k goal by 1pm on that day!

By day’s end, Rosary raised a total of $80k from 226 donors – 56 of which were first-time donors. And the added bonus? Donors reported that they loved seeing comments from fellow donors come up in real-time. Being able to see how others felt about Rosary helped to increase the sense of community around supporting their beloved school – making a huge impact on the bottom line. 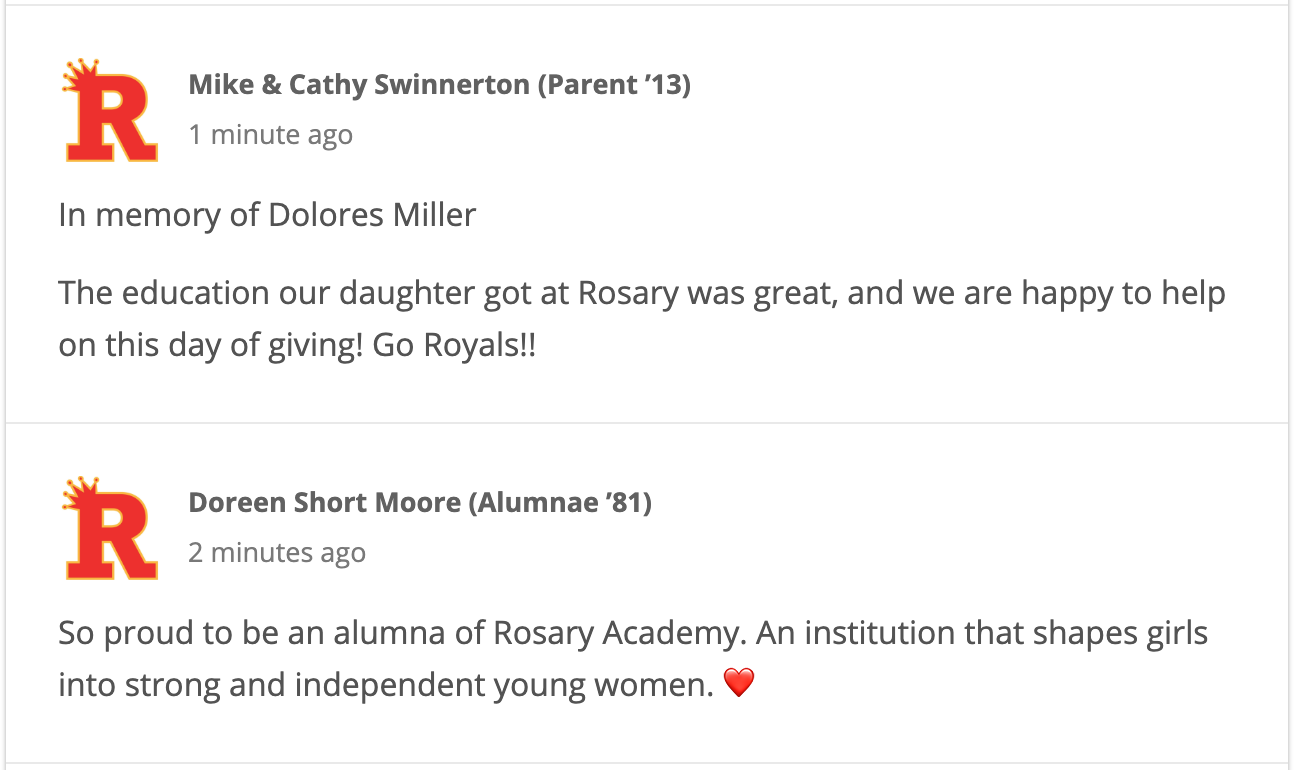 Comments left on BoostMySchool by Day of Giving donors

Focusing on the long-term value of their donors, Rosary Academy’s future strategy is to continue to provide meaningful opportunities for donor engagement. They are already hard at work stewarding their new group of first-time donors by evaluating the comments made on the platform throughout the Day of Giving. Now, the capabilities to leverage the data gathered on BoostMySchool during the campaign has them setting next year’s goal even higher.

Over the last two years my team has focused on building a comprehensive fundraising program and culture of giving. There have been numerous steps leading up to our Day of Giving success, however, the primary two that attributed to this specific campaign were donor recognition and overall messaging.

With the data analyzed and the results attributed to the focused work of building a comprehensive fundraising program for the school, retaining their Day of Giving donors has become a key focus for Rosary - and with good reason. They know that capitalizing on the momentum of such a successful day will only help to promote further engagement throughout the year. Cultivating long-term donor relationships take trust, respect, and commitment – another “3” that aptly describes Rosary’s Day of Giving!

Holman is the founder and CEO of BoostMySchool. He actively helps his former high school with their fundraising and alumni outreach, which is how the idea for BoostMySchool came about. He is a strong believer in the power of education to change the world and volunteers with programs that support underrepresented students in math and science.