How Catlin Gabel School United their Community in Support of DEI

I believe every single child is a child of diversity, meaning nobody is ever just looking through one lens.

Catlin Gabel, located on 67 acres in the southwest hills of Portland, Oregon, is a nationally recognized progressive independent day school. It serves 773 students from preschool to 12th grade and is committed to upholding its values of integrity, inclusion, and kindness. Although the school has a diverse student body, with 44% of its students identifying as persons of color, the school is focused on continuing to create better systems and practices to create a more inclusive environment in which all students feel seen, heard, and valued. 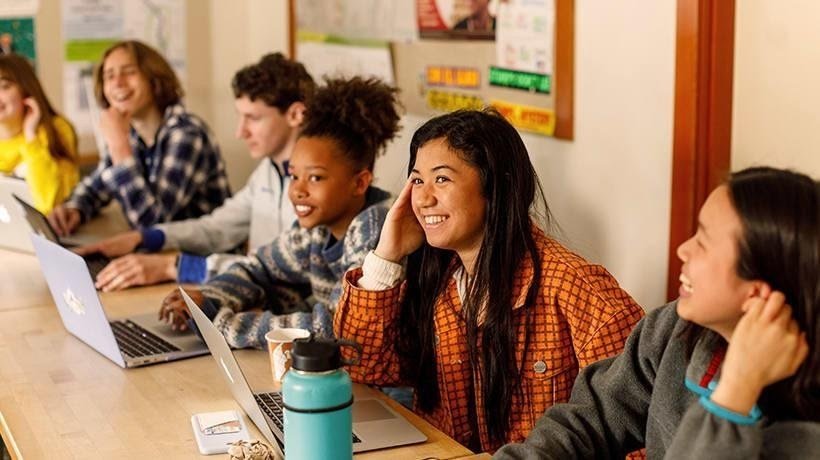 With recent national social unrest rising and conversations about race equality evolving in communities everywhere, including educational institutions, Catlin Gabel recognized that some of the initiatives it seeked to launch to support anti-racism efforts would require financial resources to do so. Fortunately, conversations over the last several years with an alum and Board Trustee regarding these new initiatives, as well as past efforts, culminated in a gift commitment of a $50k challenge towards raising money in direct support of diversity, equity and inclusion. The challenge was also issued with a sense of urgency from the donor.

Evan Lewis, Fund Director at Catlin Gabel, and his advancement colleagues were now seeking to develop a campaign swiftly with a very direct purpose. Confident in knowing that diversity was something that resonated strongly with their community, they embraced the challenge and set out to bring a fundraising campaign to life, called Support Direct & Immediate DEI Work at Catlin Gabel, in just a few short weeks.

Evan reflecting on the unique timing of running this DEI campaign

The timing of the significant matching-gift certainly suited Catlin Gabel’s continued dedication to DEI and could now serve to broaden the reach of the School’s DEI efforts. But it was the immediacy of launching the campaign in July – the least likely month of an academic fundraising calendar to run a campaign – that would be of initial concern to Evan and his colleagues. With families and faculty away from campus for summer break, and having just wrapped up a very successful financial assistance campaign in May, they were uncertain how a restricted gift campaign would be received at this time.

However, with current social distancing regulations leaving people craving more connection, and many from their school community being forced to forgo summer vacations due to the pandemic, the campaign’s purpose and timing proved to be perfectly matched. The advancement team now turned their focus to building a campaign based on supporting an exceedingly timely need with a very specific ask to unknown expectations.

Relying on a Familiar Partner.

Evan on why they partnered with BoostMySchool for this campaign

From the unconventional campaign timing, compressed launch deadline, and the campus community remaining remote due to the pandemic, Evan’s team knew that it would be essential to their success to collaborate with a tried and true fundraising partner.

In May 2020, Catlin Gabel partnered with BoostMySchool, a giving and engagement platform designed exclusively for schools, to exceed a $315,000 goal in support of an emergency financial assistance fund. It was this spring campaign that brought unsolicited praise from their donor community regarding the polished look of the BoostMySchool landing page and the ease of making a gift using Apple Pay.

Additionally, with their advancement team all working remotely, it would be nearly impossible to run the campaign in-house. With the need for an easy and quick way to create a campaign web page using minimal staff hours, BoostMySchool was truly the best fit for this restricted giving campaign. The team once again selected the platform as a valuable collaborator in building a place for their community to gather - make their gift, engage with one another, and connect with the School in support of the DEI initiative.

Evan on how BoostMySchool helped them achieve their campaign goals

With the messaging articulated and well-defined – to immediately make Catlin Gabel a safer, brighter, more inclusive community for every student – and a fundraising partner in place, the advancement team was now able to dedicate crucial time to building a system for communication. Their strategy emerged out of the necessity to meet the condensed timeline set for launching the campaign.

The Catlin Gabel advancement team quickly divided the tasks associated with the campaign plans among its members in order to maximize their time and efforts. Whether it was the social media messaging and schedule, back-end data set-up, email communications, or personal phone outreach, Evan found it easy to track their collective progress using the BoostMySchool platform.

In addition to incorporating a few additional emails to the launch schedule, they relied heavily on the team’s frontline fundraisers to reach out to constituents who they shared a more personal relationship offering the news of the special campaign initiative. As it turned out, their outreach strategy proved to be very welcomed given the many months of social distancing and campus closure due to the COVID pandemic. It was also the catalyst that sparked their school community to visit the webpage during the campaign days.

The Power of Community.

Evan sharing how BoostMySchool enabled visibility into the community’s support

What started as continuing a commitment to diversity, equality and inclusion awareness, quickly turned into a tangible opportunity for the community to come together to inspire action amongst one another. Throughout the three-day campaign, the advancement team relied on BoostMySchool to provide a virtual place that resonated with emotion for their now remote school community to gather in support alongside alumni, supporters and friends.

Utilizing the virtual platform allowed Catlin Gabel to further donors’ impact on their mission and boost the number of gifts by providing an easy to navigate and mobile-responsive campaign page filled with human spirit. The page served to provide a seamless giving experience with no separation between the messaging that moved them to donate and the completion of their donation. Supporters could leave posts of encouragement, shout-outs, honors, and memories within the comments tab. They could also see, in real-time, a list of fellow supporters along with their comments. The list was quickly searchable by constituent groups - such as alumni, parents, and faculty – which served to build excitement and connect the community. 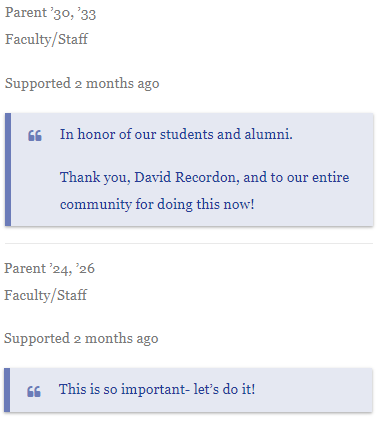 Comments made by parent donors showing excitement in support

The positive spirit was also easily shared with faculty and staff by emailing the campaign link and asking them to “stop by” to see the outpouring of support, some of which candidly thanked beloved faculty or staff members. The comments, memories, and praise offered on their behalf was emotionally moving for many of the faculty and staff and provided the feeling of an “in-person” community that was sorely missed by all.

For alumni, supporters and friends, the impact of being a part of meeting the challenge to unlock the Trustee’s gift was visibly measured. They not only were able to visit the campaign page to check-in with one another, share a memory, or offer a heartfelt message of encouragement, but also view the real-time progress on their fundraising thermometer and feel the “team” effort pushing them toward the goal.

Over the 3-day campaign, Catlin Gabel unlocked the Trustee’s match by raising $86k, representing 130% of their published goal. They successfully leveraged a restricted giving campaign in support of creating an education and culture that reflected the world in which they see today. The personal and financial impact on their entire school community has created a lasting awareness, focus, and funding for their continued DEI work.

Their continued partnership with BoostMySchool provided essential engagement, visibility, and flexibility for their campaign strategy. The groundswell of support for this initiative clearly signified its importance to the community. It also proved that despite the summer timing, providing constituents with an opportunity to support something that they care about never takes a break. The winning formula needs only to include a passionate cause and a digital platform partner ready to connect a supportive community.

Connor Forde is an experienced Account Executive at BoostMySchool. Driven by the impact of philanthropy on schools, he takes pride in providing exceptional guidance to the teams he works with to create engagement among their community. Connor leads schools by identifying, executing and analyzing successful advancement strategies that fit their strategic needs.